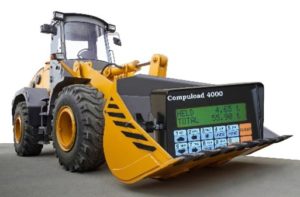 INSTANT WEIGHING – the WA distributor of the Australian made COMPULOAD scales, provides sales and calibration testing services throughout all WA, and gives excellent Australian support to all our customers Electronic Transmission of Weight Data via WIFI, 3G or 4G etc to a PC is now an available option. Know your output loadings by using the Australian made COMPULOAD series of scales Applying the principles behind load cell temperature compensation, Instant Weighing has found a way to

better compensate for the temperature changes that the scale on the front end loader experiences during its 24 hour day operation.

Comparisons of load weight as provided by our NW customer

Our client obtains the load’s weight using the TRADE APPROVED COMPULOAD scale to load their 4 trailer road trains to haul ore some 500kms to port.

The second load weight is obtained by the port authority as they both load and survey the ship, and the following comparisons of weights were recorded and reported to us by our client.

The COMPULOAD scale recorded a total weight of the ore transported as 18,800t.

The port authority recorded a difference of just 37t. That is a weighing error of just 1/5 of 1%.

The COMPULOAD scale recorded a total weight of the ore transported as 20,070t.

The port authority recorded a difference of just 48t. That is a weighing error of just 1/4 of 1%.

COMPULOAD’s ability to temperature compensate has saved our customer substantial wear and tear of their equipment and expense while fulfilling their contracts.

The TRADE APPROVED COMPULOAD 6000 scale can be programmed with specific target weights for each individual identified axle group to stop the operator overloading.

The COMPULOAD scales also have the optional ability to electronically transmit the loaded weight data back to the office PC provided the front end loader is working within either WIFI, 3G or 4G transmission areas.

Instant Weighing is also heavily involved in the testing of various existing scales and also supplies new scales that are used to determine the Verified Gross Mass (VGM) weight of an export sea container for SOLAS/AMSA weighing purposes. Only NMI scale testing procedures and NMI certified test masses can be used during the AMSA testing process. SOLAS/AMSA audits have become very stringent, and our test procedures and written reports have always passed when the AMSA Inspector has conducted an audit.

The AMSA laws state that the scale used to determine the VGM weight of a container to be transported on water, does not have to be a “TRADE APPROVED scale” but must be tested as if it was a TRADE APPROVED scale for that type and capacity scale. NMI Trade Approved scale testing is a very complex set of rules. Both the National Measurement Institute (NMI) testing rules must be followed and NMI Regulation 13 certified test masses must be used according to the NMI testing rules. This is why, many written test reports that have been completed by persons who do not hold the appropriate NMI scale testing license, have failed when lodged as part of the AMSA audit conducted by the AMSA Inspector. The AMSA Inspector will insist on your company having the correct written test reports before they will finalize and approve their audit.

Our calibration testing services covers the area of WA, from Esperance to Derby, and INSTANT WEIGHING visits these areas at least yearly or as and when required.

INSTANT WEIGHING – IS AN AUSTRALIAN OWNED AND OPERATED COMPANY

WHEN THE OPPORTUNITY IS AVAILABLE—-WHY NOT BE PATRIOTIC AND PUT AUSTRALIAN COMPANIES AND PRODUCTS AT THE TOP OF YOUR LIST?